This is a fun craft blog, and I "linked in" on their page so you can see a little blurb of my blog on this blog!
Posted by Michelle at 6:42 PM 1 comment:

We have lived in our house for almost two and a half years and I am finall getting things decorated. I found an awesome bedroom design on a site called Dirt Cheap Decor! I absolutely loved it, so with Gabe's approval we decided this would be our new room! I got AMAZING deals on craige's list and local thrift stores. 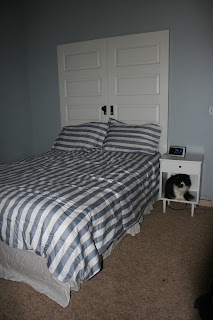 My new headboard and night stand! 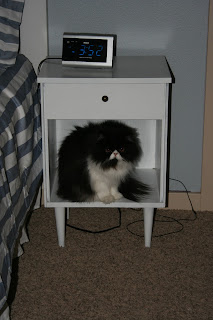 I got this night stand at a thrift store for $6 and just painted it white. Also in this picture is Mimi the cat. 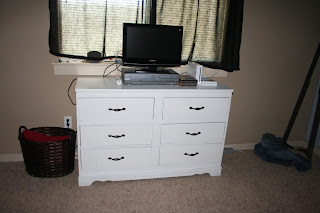 This dresser I got on craige's list for $10! It was already white, so I just touched it up and painted the handles a different color 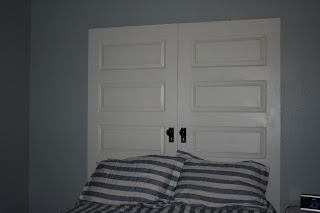 These doors I got on craige's list for $5 each! The awesome door knobs are from my Grandpa. He has all kinds of stuff at his house, so can usually find what I am looking for if I ask him. 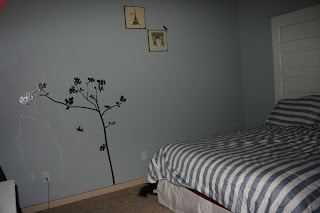 My tree. This wall still needs some work, but I like the fun tree I got on amazon for free with my swagbucks.

My favorite thing is getting things for free! I love getting the JC penny or Kohl's $10 of $10 coupons in the mail! With my Kohl's coupon this time, I got two plain shirts for free! I decided they needed some decoration to make them more exciting. Here is what I came up with. 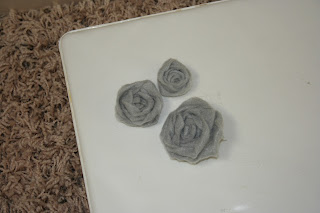 First I started with making some felt rosettes 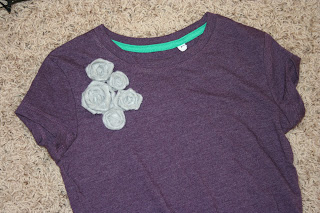 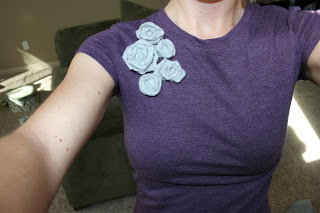 Shirt with me in it after! 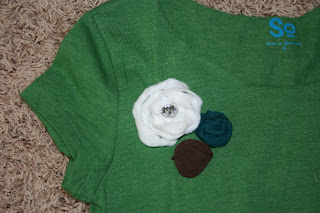 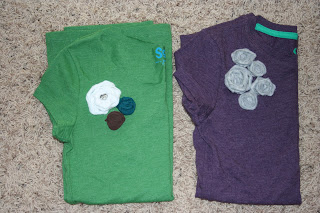 A few months ago my husband and I set out to find a buffet table that would fit in our dining room. We searched high and low for about a month and finally found one. It seemed like craige's list hardly ever had any, but  now that I don't need one, I see about 4 new buffet tables a day! That is always how it goes. Here is our before and after. 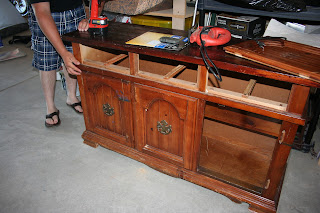 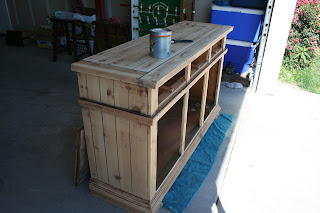 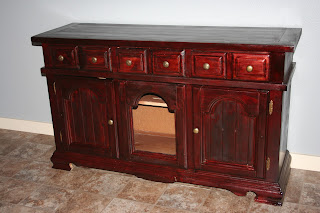 Stained! We cut out the center and added glass for a while... Thomas broke that and we decided it wasn't safe so now I have a pretty fabric in that spot 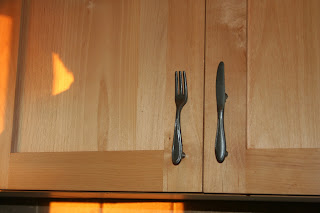 My fantastic husband also attached these to our cupboards! I bought these when we first got married and have been saving them for our dream house... I figured no time like the present so they are in our house now!
Posted by Michelle at 9:08 PM No comments:

I am a junkie for chef shows. I watch Top Chef, Hell's Kitchen, Master Chef, Iron Chef and any other chef reality show I Can find! My husband is a trained chef so he gives me inspiration to try new gourmet things. One episode of master chef, the great Chef Ramsay had the amature chefs make a souffle. Supposedly this is a very difficult dessert because it can be ruined very easily. I thought I would try it out! Here is how my chocolate souffle ended! 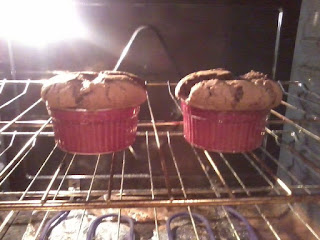 This picture was taken with my cell phone, so it isn't excellent, but I was really excited about how they turned out! They were nice and crisp on the outside and then when you dig into the center they were perfectly spongy and moist. Here is the recipe I used from the food network website.
Chocolate Souffle- for two
Bottom of Form
Ingredients
Directions
Position rack in center of oven; preheat to 375°F. Lightly coat two 10-ounce ramekins with cooking spray; coat the insides of each with 1 1/2 teaspoons sugar.
Place chocolate in a small microwave-safe bowl. Microwave on Medium, stirring every 20 seconds, until melted, 1 to 2 minutes. (Alternatively, see "No Microwave?" below.)
Whisk egg yolk and cream in a medium bowl until combined. Whisk in the chocolate until smooth, then whisk in flour and cinnamon until incorporated.
Beat egg whites and salt in a medium bowl with an electric mixer on high speed until soft peaks form. Beat in the remaining 2 tablespoons sugar in four additions, until stiff, glossy peaks form.
Using a rubber spatula, gently fold half the beaten whites into the chocolate mixture until fairly smooth; then gently fold this combined mixture back into the remaining egg whites until no white streaks remain. Divide between the prepared ramekins and place on a baking sheet. Bake until puffed and firm to the touch, 18 to 22 minutes. Dust with confectioners’ sugar, if desired. Serve immediately.
No Microwave? Place chopped chocolate in the top of a double boiler over hot, but not boiling water. Gently stir until almost melted. Remove from the heat and stir until the chocolate melts completely.
________________________________________________________________

I recommend doing the chocolate last, because I had a problem with my chocolate getting hard before I was ready with the egg whites! Also, this says 18-22 minutes, Mine took about 23 minutes, but that was me standing by the oven watching it from 13 minutes on! I did NOT want to screw it up and have my husband be right that the dessert was difficult. My favorite was that it tasted like uncooked cake batter. Who doesn't love uncooked cake batter? This was my first ever eaten and baked souffle! Try it out!
Posted by Michelle at 8:48 PM 4 comments:

Welcome! I love looking at all the wonderful creative blogs floating around and I decided I should try one out! This blog is going to be a place where I post new crafts I try, recipes and just things about me in general! Thanks for looking!
Posted by Michelle at 8:41 PM No comments:

I participate in these link parties!

Michelle
Idaho, United States
I am a DIY'er, fixer upper, furniture restorer, bag lady, wife and mom who cannot help but to have a million projects going on at once! Welcome to my crazy world!

"Let the morning bring me word of your unfailing love, for I have put my trust in you. Show me the way I should go, for to you I lift up my soul." Psalm 143:8

Resources for Christians in business